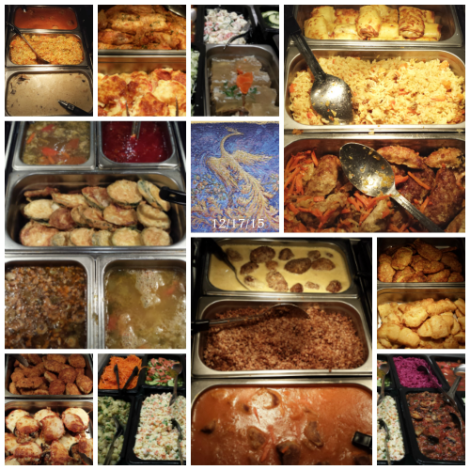 Some of the many Slavic dishes sampled at Firebird

In Slavic folklore, the Firebird is a magical glowing bird from a faraway land, both a blessing and a curse for its captors. Perhaps most distinctive are its magical glowing feathers, which do not cease to illuminate after being plucked from the Firebird. A single feather, it is said, could light up an entire room.

Much like the feathers, the aroma of almost countless dishes filled the dining area of Firebird Slavic Restaurant in Carmichael, during several visits in December.

No longer billed as simply a Russian restaurant, Firebird Slavic served up foods representing the large, multi-ethnic Eastern European bloc, with its various climates and thus many foods. As owner Lilia explained, they use fresh, never frozen, ingredients so dishes change on a seasonal basis. Typically, the foods available at the buffet far outnumber the signs indicating what each container provides (or were not quite accurate) so it is truly a bit of a dining adventure.

Since Russian cuisine is perhaps most famous for its soups, our dinner featured four difference varieties, which were replenished as fast as our diners could slurp them down. Especially popular was Firebird’s Borscht soup with potatoes and beets. Also available were a fish soup; Solyanka, a delicious, complex smoked meat soup with green olives as well as a flavorful lamb soup. Breaded and fried zucchini slices accompanied the soup section of the buffet.

Among the more familiar dishes, diners could opt for baked chicken and potatoes; chicken stroganof; meatballs in creamy gravy; bulgur and a paprika tinged beef dish. Other options include cheesy baked eggplant and golubtsi/halupli, cabbage rolls stuffed with rice and meat.

Rounding out the more recognizable dishes included blini with chicken, which is basically a crepe stuffed with chicken; rice pilaf and zrazy. Probably the most popular dish among the Sacramento Epicurean diners, Zrazy features thinly sliced chicken and beef, stacked and rolled into crescent shapes, then pan fried with carrots and vegetables to a delicious result.

If you’d like to sample Firebird’s wide variety of Slavic fare, check out their Tuesday through Sunday lunch buffet. Closed on Mondays, Firebird is also open for dinner, served a la carte.