I toyed with the right adjective to describe this post…hedonism, debauchery, lack of redeeming nutritional value, etc… So folks, there’s nothing especially healthful about this post. I will note that I split the order over two meals and hit the gym to compensate, but health is not the point of this post. It’s about going for it because you never know what tomorrow might bring.

Every couple of months I get together with a group of friends to celebrate Suzanne, or Mother Shucker as she is affectionately known. I met Suzanne when I joined the Sacramento Hash House Harriers (SACH3). Several years ago, while still in her early 40s, Suzanne had a stroke that left this former marathon runner and mother physically impaired but still social, friendly and hilarious. She did not hesitate to let me know that she’s looking forward to the next game night at my house…

We sometimes struggle with locations where she can get in and out easily. But someone chose Broderick Roadhouse in West Sacramento and planned a meet up last week. Now Hashers, as we’re known, are no strangers to dive bars or seedy holes in the wall. That’s actually what we expected from this little bar by the river. Instead we found some of the best sandwiches and burgers this side of YOLO county (I’m not making that up, there really is a Yolo county in California). 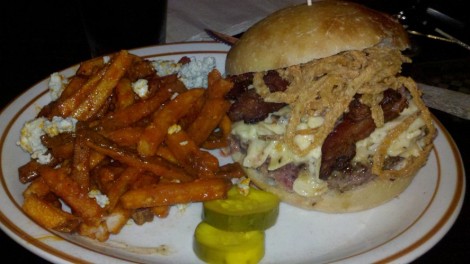 Deliciously decadent burger and fries from Broderick Roadhouse, because you only live once.

Honestly, they had me at bacon mac-n-cheese! The waitress let me try the buffalo sauce before I splurged on the fries. Being a central NY native, I’m rather picky with my wing sauce as I find few places come close to what Buffalo made famous. While their version was more garlic and peppery, it was a nice add-on to a classic Buffalo base rather than a sad imitation.

I give Brodericks props for a very nicely done medium-rare burger. The beef was juicy and flavorful. For an over-the-top burger, every component came through and held its own. The textures were nicely layered too, from soft to crunchy. Even re-heated the next day, the burger and fries were great. Paired with the beautifully dark goodness of the Firestone Velvet Merlin Stout, I was Floored by my meal at Broderick Roadhouse.

The staff also did a good job of keeping up with an ever evolving group of diners. Suzanne was delighted to see nearly a dozen folks come out to spend time with her. They graciously came up with individual checks for each of us and we tipped heavily in thanks. It was great to spend a couple hours with Suzanne, get her out of the house and among friends. When I dropped her off at the end of the night, her SO seemed refreshed from his couple of hours of quiet too.

Culinary Hedonism? You betcha. Worth every penny and calorie? Absolutely. Great time with great friends? No doubt!